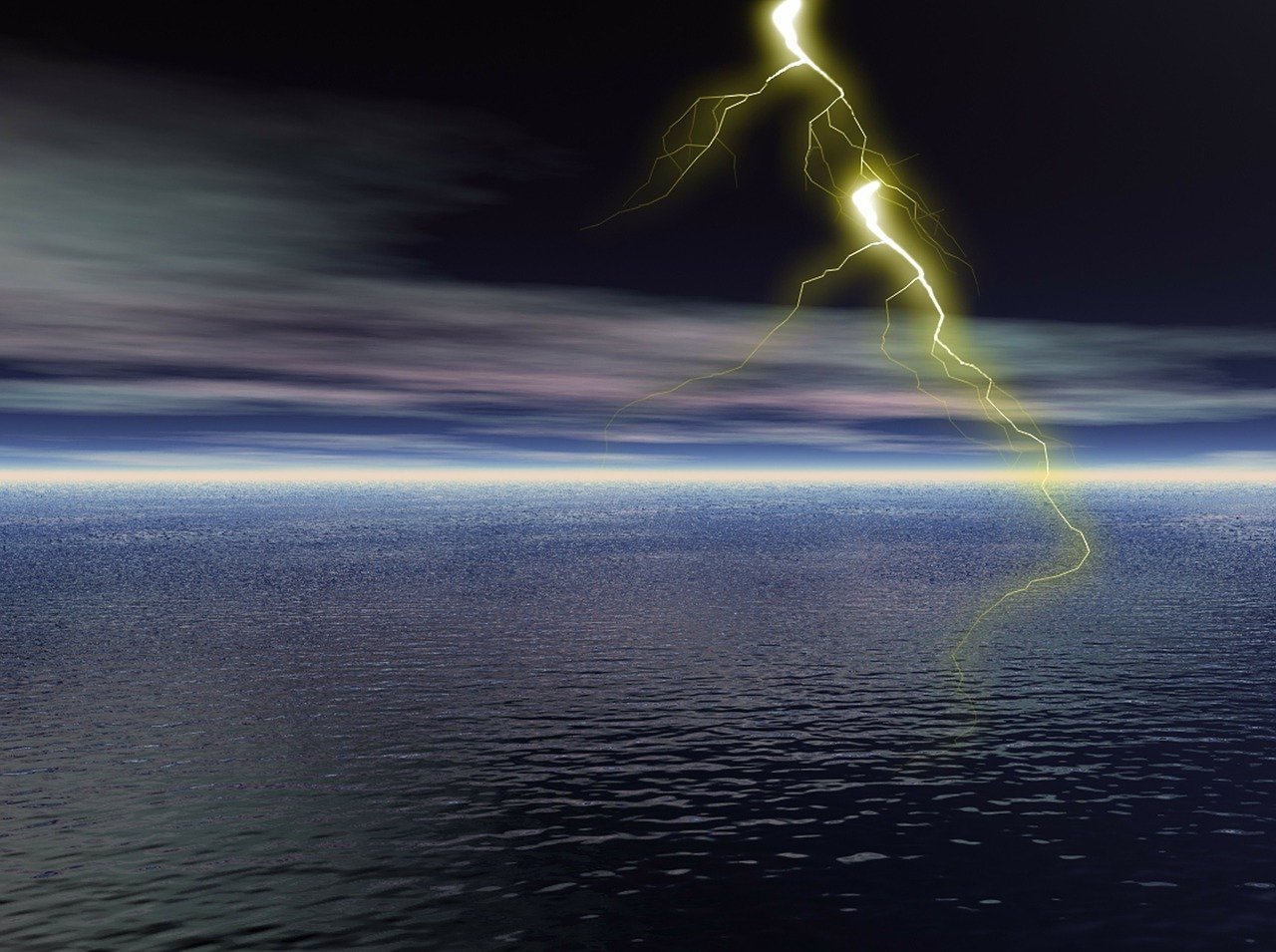 “Natural Mystery has always been intriguing to me. Top of the list has to be the enigmatic Bermuda Triangle. How can so many planes and boats vanish? Why can’t science explain the weird happenings? My solution is because there not one explanation but many — and no I don’t think Atlantis is one of them!”

In another note I must vanish for a few days myself after today. My laptop must go in for repair thanks to its keyboard failing. I shall return in a few days all being well. For now enjoy this tale …

I wrote this story in answer to the following prompts:
FOWC with Fandango — Planet
Your Daily Word — Repute
Word of the Day Challenge — Persistent
Ragtag Daily Word — Triangle

Curse of the Bermuda Triangle

“Professor Kelvin, can you please tell me again; why we’re out here?” yelled Rube failing to protect himself against heavy spray from the ocean and rain in equal measure. He was the unfortunate skipper of the Ocean Adventurer – an ocean survey hydrofoil vessel. Under duress, he was steering south-west from Bermuda bearing directly into the heart of the triangle.

“Because, dear boy. The Bermuda Triangle is the most mysterious of all things on our planet. If we are persistent, we shall find out the reason why. I believe today will be the day, we become celebrities. We shall find the secret of the Bermuda Triangle.” Professor Kelvin was a scientist of ill-repute. It wasn’t that he was bad at what he did. No, everybody just thought he was a raving lunatic.

“Fine — why the hell do we have to come out here during — aagh!” Rube was thrown against the boat’s wheel as the vessel fell into a trough and rolled violently out on the next wave. As it levelled, Rube watched his lunch box float up out of the cabin stairway and sail over the gunwale into the water. “… a storm,” he finished feeling most aggrieved.

With water dripping out of his mass of wild grey hair, the Professor seemed nonplussed by the weather. His excitement was as energetic as the lightning which flashed overhead with growing frequency. “The storm is the key. When we arrive in the centre of the triangle we begin!”

“Begin what? Saving ourselves or drowning?” Rube asked while wrestling to keep the boat from capsizing.

“Neither, dear boy. We shall stimulate the triangle with a special probe I built and brought with me. I believe it will open a wormhole to another triangle elsewhere on the planet. When it opens, we shall vanish proving to the world, we know how the triangle works.”

Rube’s jaw would have fallen open in shock; had he not fought the compulsion through the desire not to drown by swallowing copious amounts of seawater. “I hate to tell you this, Professor. But there’s a giant flaw in your grand plan.”

“Not possible. I have gone over everything multiple times. My plan is flawless!” Kelvin threw his hands in the air as blue bolts of lightning split the dark clouds above. If anybody could look insane the professor succeeded just then.

“If we vanish the world will know nothing of your accomplishment because we will have — BLOODY WELL DISAPPEARED!” Rube spun his wheel against a savage wave and breathed a sigh of relief as the boat came through relatively unscathed aside from the lake on the deck.

“I’m afraid, I don’t follow. We need to disappear to show the world the secret of the triangle. We’ll —”

“Be statistics just like Flight 19, the USS Cyclops, the Airborn Transport Douglas DC3 and the I don’t know — one hundred thousand other boats and planes which just vanished around here. Which means —Nobody will ever see us again if this works, you bloody idiot!”

“Sure, will be seen a —” a large wave crested into the boat, knocking the Professor to the deck. He simply put his glasses back on and stood up again with a smile. “Hehe, that was quite a wave!”

“No kidding! Will be on the bottom of the bloody ocean soon!” Rube scowled.

“We’ll be fine. I calibrated my Triangle Stimulator to open a wormhole to the Dragons Triangle. We will appear in the Devil Sea just south of Tokyo in a matter of moments. All we have to do is get the right spot here first.” The Professor produced a compass and delighted in the fact that it was spinning like a top. “We are close!”

‘Crazy lunatic!’ Rube muttered under his breath as the loudest rumble of thunder crackled overhead. “The compass is spinning because of all the magnetite beneath the hull of this sinking boat!”

“And how do you explain the strange magnetic folk building around us right now?” Kelvin gestured to the tumultuous sea surrounding the vessel.

Rube couldn’t believe his eyes. There really was a fog rolling just above the waves like a collapsed cloud. “Alright, you win. But if we disappear, I’m so gonna kick your arse!”

“Then let’s do this!” The Professor staggered across the deck to a large stainless-steel box. He unclasped and threw it open. Inside was another aluminium box. This one was covered in dials, wires, buttons and readout displays. This was the Triangle Stimulator.

Rube kept one eye on the violent ocean and the other on the Professor. He expected to see an explosion or a wall of fire ripping his boat apart at any moment. “Don’t fry us, will you?”

“Have a little faith, dear boy.” Kelvin turned to face him with a telescopic metal rod in hand. The business end was rounded while the other was connected by a cable to the box. He extended the probe until it was ten feet long. The unwieldy length made him look drunk as he struggled across the heaving deck to the gunwale and clamped the device to the hull. “To the Devil’s Triangle and beyond!” he yelled.

“To oblivion, more like!” Rube spluttered taking the full onslaught of the storm to the face.

“Point us west,” instructed the Professor now fiddling with buttons and knobs on the device.

Rube looked at his spinning compass. Finding West just then would be as impossible as finding a real human lady on a dating site. “You show me west and I’ll capsize us in that direction!”

Kelvin furrowed his brow as he looked about the storm. “That way!” He indicated off the starboard side in the most random of ways.

Rube groaned as he aimed the boat. “Will be aiming side-on into the waves. Be quick about —”

A tremendous bang and a brilliant yellow flash lit up the boat. The professor was thrown from his device. He surfed along the wet deck like an out-of-control seal and thundered down the steps into the cabin.

Rube stood paralyzed as he watched the bolt of lightning recede from the stimulating probe. His ears buzzed as it plugged into a mistuned radio. Then darkness returned and he collapsed on the deck with a wet thud.

Sometime later he woke up with somebody shaking his shoulders. The movement left his skin burning leaving no doubt he was sunburned or worse.

“Rube, wake up! We did it!” yelled Kelvin bursting with excitement.

Rube flicked open his eyes to see the charred looking Professor dancing in his vision.  “Did what? You turned us into pork scratchings with a lightning bolt you plank!” He groaned while realising there was sand beneath him.

“No — we teleported through a wormhole. We’re no longer in the Bermuda Triangle!” Kelvin sat him up and pointed around a sandy beach with palm trees.

Rube saw the remains of his precious boat spread in splinters all over the beach. “Shit!” Looking the other way, he saw a jeep heading towards him. Four soldiers aiming large guns were visible inside. The insignia on the doors left him wide-eyed. “Double Shit!”

“You don’t look happy, Rube! Smile! We are about to be millionaires with the secret of the Bermuda Triangle!” Kelvin said with a grin stretching from ear to ear.

“No! We are about to be prisoners at the Cuban president’s pleasure. You shipwrecked us in Cuba without passports and permission to be here.” Rube stood and raised his hands.

“Not to worry. When I explain that we vanish in the triangle and reappeared here, I’m sure they’ll let us go.”

“Perdón. Naufragamos en la tormenta.” Rube replied explaining about the storm and shipwrecked vessel as he stood and raised his hands. “If we get out of this alive, I’ll kill you, Professor. The only thing you managed to vanish was my bloody lunch!”

“I wouldn’t say that,” said the Cuban soldier grinning as he applied his handcuffs. “You’re both about to disappear for a very long time!”

6 thoughts on “Curse of the Bermuda Triangle”