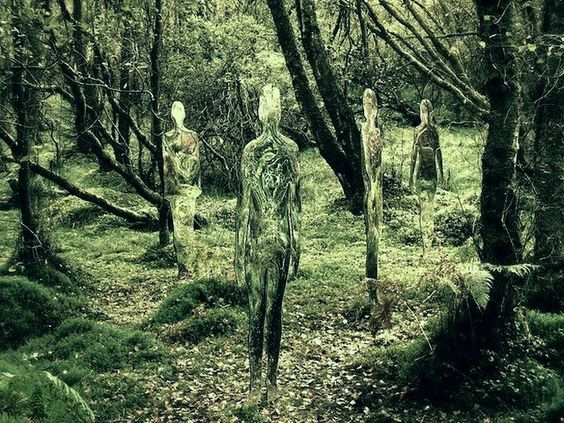 Presenting my 750 word challenge story for the above picture from sculpture/artist Rob Mulholland who made these out of Perspex, in 2009. He calls the project Vestige.

I’m please to share this story for Fandango’s Flashback Friday.

Kerry’s world had faded to sunlight dappled shades of green. She felt as if the woodland was hugging her tight. It was always her most favourite place to go for a walk; to relax.

Her hazel eyes took in the squirrels bounding along the branches and burying acorns within the mossy ground, for winter.

With a content smile on her face, she leapt over a fallen branch and continued on her walk. There was no path, Kerry never needed one, she was confident in traversing the woodland she’d grown up in.

Coming out of the oaks. she entered a wilder area of ivy-covered birches. This area always held an enchanted feel. Kerry often wondered if fairies lived here. Not long after her 24th birthday, she learned otherwise. A discovery in the woodland revealed that she was feeling the presence of forgotten souls. Beneath the mossy tussocks on the ground, she’d discovered broken gravestones, crosses, and a half-buried sarcophagus that had become an earthen mound over time.

A hidden graveyard lost to all but her.

Although she’d uncovered a few stones, no writing remained upon them, each eroded by time. Kerry walked to what she felt was the middle of the graveyard. It happened then as it always did. A breeze from nowhere fluttered the branches and stirred up the leaves around her. Kerry felt a shiver run down her spine and gulped. She wasn’t alone anymore. They were here haunting the place they were buried and forgotten.

Planting her pink-and-white trainers in the mossy ground by one of the fallen granite crosses, she began to turn, searching the trees and bushes for them. She could never see them directly; they were simply invisible like that.  If she was lucky, she would glimpse them in her periphery.

There were four figures; three females and a male, as far as she could tell. They stood as regular people, yet seemed to be made of shimmering living glass.

Today she was unable to see them at first.

A touch of her hair had her spinning around — Nothing.

A prod in her back,

Kerry gasped and tried to move again. They’d never touched her before. She couldn’t turn either.

The finger pressed her back again.

Getting the message, she stepped forward. A moment later a coldness tingling her fingers. It felt as if the spirits had taken hold of her hands – leading her forward.

For almost a minute, she stepped carefully around the mounds of moss that hid the graveyard. Soon she was stood before a yew tree which had snapped at seven feet up its trunk, years ago.  From afar it seemed the ivy had just covered it.

Now Kerry was close she could see it hid a structure.

A small receiving room. Its entrance open, yawning like a cave mouth, it was so dark within.

With the compelling energy of the souls pressing at her back, Kerry sucked in some air and ducked inside.

At once ancient wrought iron wall sconces ignited but not with regular flames. These were cold-blue ethereal flames that made her shudder with creeping cold. The little stone structure contained four niches. Kerry moved to each one and found very little information. Each was sealed with a stone inset with a circular symbol of breaking waves. None had names or dates.  There was nothing else but leaves in the room.

Kerry caught sight of one of the glassy figures stood to the left of her, she looked toward it and nodded. She understood now.  The four souls had their bodies interred in this room. She felt as if her skin was crawling with spiders, her hair began to prickle. Why did they show her? What was their intention? Who were they to have been buried in a nameless receiving room?

Kerry took a controlling breath; she’d been to the hidden graveyard many times and was never harmed – why would that change today?

With no choice, Kerry put a foot back out of the door. It felt like it went through a block of ice. A soul was stood in the way. Excusing herself, she stepped out anyway.

Back in the woodland she felt calmer but not for long.

Before her, stood the four figures, each now solid and dressed in blue suits and bowler hats. They tipped those hats with cheery smiles and melted into the trees.

Kerry looked down and screamed, she was now nothing more than a glassy spectre just as the souls had been before.