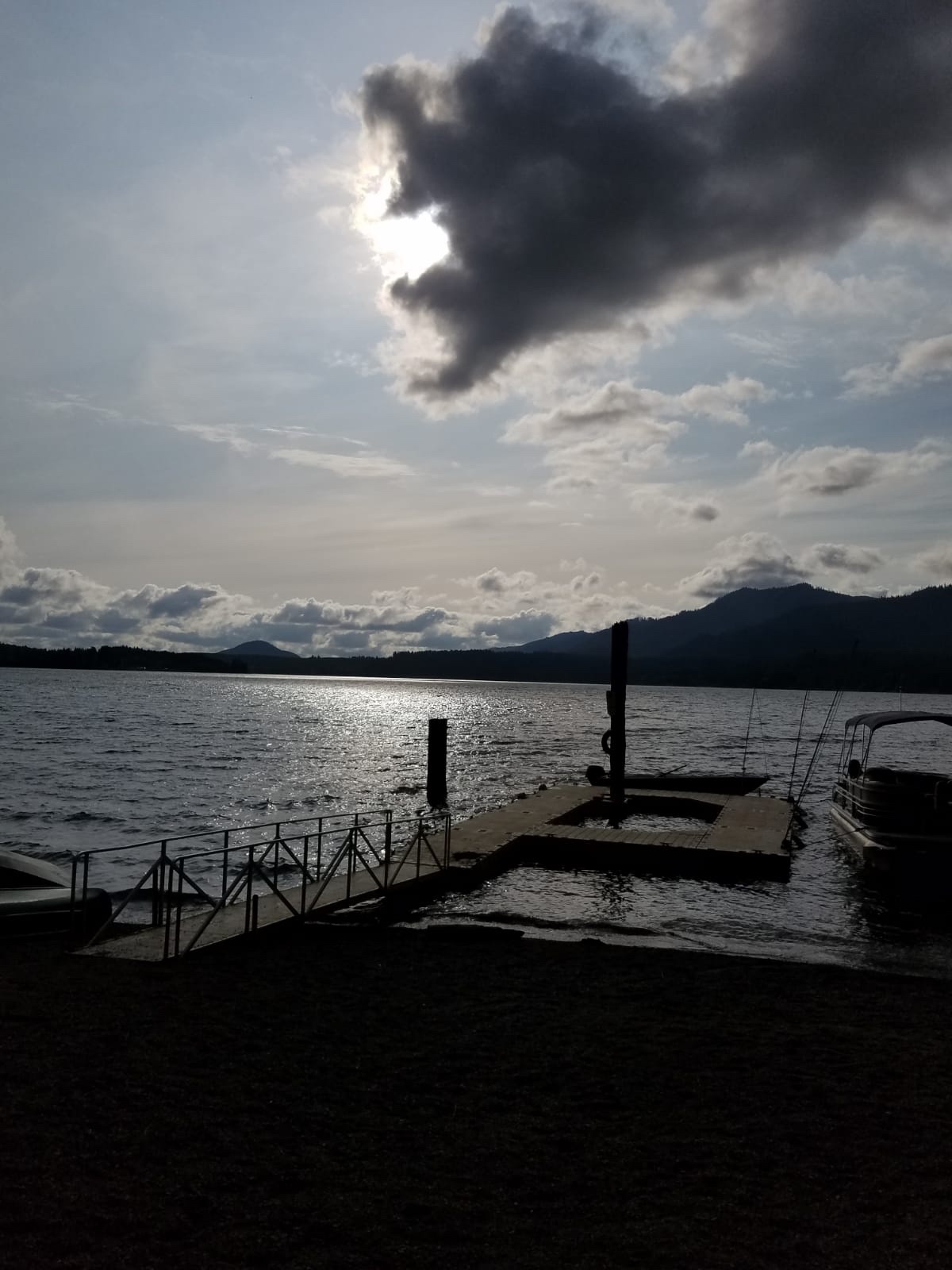 “Many lakes around the world have legends of mystery creatures living within them. Lake Champlain, Lake Ogopogo, Loch Ness, Lake Ikeda, Lake Ontario, Lake Lagarfljót. I could list all day. Whether you believe in the monsters within these dark waters, the mystery is always thrilling. Here’s my own mystery of Eider Lake.”

I wrote this story in answer to the following prompts:
Sadje’s What do you see  — image above – Image credit; Sadje
FOWC with Fandango  — Mermaid
Pensitivity’s Three Things Challenge — Gas Help Ink

“Marty, did you put gas in the boat?” Rebecca asked leading the way along the quay. She smiled at the silvery light of sunset sparkling on the dark waters of Eider lake.

“Course I did!” Marty pulled the security gate shut, picked up the couple’s picnic basket and set off after her.

“Ha, cheeky! Wasn’t my fault the fuel gauge was dodgy.” Marty unhooked the mooring lines and jumped aboard their expedition boat. Barge-like, it was flat with a blue canopy providing shelter. It had a glass bottom, and an array of scientific gadgets including depth gauges, sonar, and an ROV for underwater exploration.

“I’ll give you that one.” Rebecca pulled off her dress revealing that two-piece teal, green and blue swimsuit which looked amazing against her soft, tanned skin and platinum-blonde ponytail.

Marty gazed upon her and sighed. “As much as we might solve the mystery on this lake tonight. I think I’ve already found a beautiful mermaid.”

Rebecca smiled at him while wriggling into her wet suit. The pinkness in her cheeks showing how much she enjoyed the compliment. “Ian’s going to be mad.”

“Why?” Marty went to the boat’s controls and started the engine. With a well-practised hand, he eased the vessel from the moorings and set it putting into the lake. Beneath the cloudy skies, the water was like ink beneath the hull.

“You know he hates …” Rebecca sucked on her dive tank respirator to test it. “Inter-colleague relationships.”

“Well, this one is entirely his fault.”

“How do you figure?”

“He put me with the most beautiful person on the payroll. How could I not fall in love with you?” Marty engaged the GPS and put the boat on an automatic course. Stepping along the deck, he began to help Rebecca on with her yellow scuba tanks.

“Yeah, he also put me on the expedition boat with the most charming oceanographic scientist I know,” Rebecca’s eyes sparkled as her fingers graced the bandaging on his left bicep and shoulder as she kissed him. “Let’s get this done quickly and go back to the hotel.”

“Now, that’s a good plan.” Marty waggled his eyebrows and returned to the boat’s controls. “GPS shows we’re coming up to the drop-off. We’ll be above the cave in a moment.”

“Great. If a strange creature lives in this lake. It must reside in that cave. The sonar would have found it during our sweeps over the last two weeks otherwise.” Rebecca dropped to her knees and reached into the water to splash herself and acclimatise to the temperature.

“I agree. Dropping anchor.” Marty pressed a button setting an automatic crank grinding chain out as the anchor descended towards the lake bed. With it working he dropped the ROV over the edge and set it ‘mowing the lawn’ the term coined for the up-and-down search grid that resembles a person working with a lawnmower. “Okay, we’re all set.”

Rebecca looked toward Marty. Her spreading smile was torn off her face. Something grabbed her arm, pulling her off the boat.

Marty heard her gasp and then the splash of her body entering the water. “Rebecca!” he yelled as he ran to where she’d been kneeling. A few bubbles remained as proof that she got into the ink-like water.

“Shit!” Marty was a good swimmer but on his last dive, he’d torn his bicep at the shoulder meaning he couldn’t swim at the moment. Running back to the controls, he took the ROV off automatic and engaged its powerful spotlights. They revealed a lot of particulate matter floating in front of the onboard camera. Visibility was no more than 15 to 20 feet.

“Rebecca! Where are you?” Marty was close to hyperventilating as he began to scan the water beneath the boat. On each pass, he drew the ROV deeper and deeper. After several minutes he came upon the cave entrance. He was just in time to see bare feet and an enormous emerald green fluke disappear into the darkness.

Marty couldn’t believe his eyes. “What the hell was that?” he breathed while setting the ROV to follow. The light began illuminating the rugged brown rock walls of the narrowing cave. prehistoric bones appeared laying in the sediment on one rocky shelf. An ancient dive helmet came next half-buried in silt.

An explosion of bubbles clouded the view.

“No, damn it!” Marty tried to speed up and get clear of the disturbance. A flash of platinum changed his mind.

Rebecca’s smiling face filled the camera’s view. She gave an okay sign, removed her regulator and mimed blowing Marty a kiss. Swimming back a couple of feet, she pointed to the ROV, then upward.

“You want me to surface the ROV? Fine.” Marty shook the controls making the underwater vehicle nod.

Rebecca gave a thumbs up and disappeared into the darkness.

With no choice, Marty returned the ROV to the boat. He began to pace back and forth as a thunderstorm broke over the hillside. Ordinarily, the dazzling light show and the musical rumbles of thunder would relax him. Not tonight, Rebecca had been taken by another being. Although she seemed happy, he wondered if he’d ever see her again.

Thirty minutes passed to the slapping of water against the hull. An almost supernatural silence gripped the lake as Marty waited impatiently. Rebecca had seven minutes of air left now.

It was so quiet on the lake, that the sound of scuba tanks clanging down on the deck, scared the life out of him. “Holy crap, Rebecca!” he gasped as he ran over to help her aboard.

“Hello to you too,” she said with an alluring smile.

Marty didn’t care that she was soaking wet. He threw his arms around her and hugged her for all he was worth. “You scared me. What the hell happened down there. I saw a … something. A large fluke — maybe?”

“You saw nothing,” Rebecca set her steely eyes on his. “This expedition is over. We must report the ROV’s camera failed. We confirm the cave leads nowhere and identify no unusual creatures in the lake.”

“It is.” Rebecca began to remove her wetsuit. “As far as the world is concerned nothing unusual happened tonight. Trust me, that’s how it must be. Okay?”

Marty helped to get her feet out of the neoprene and handed her a towel. “Okay, if you insist. I don’t like it though. Not knowing what happened, I mean.”

Rebecca reached forward and hugged him, “Can I trust you not to reveal anything?”

“Of course,” Marty held her gaze and nodded cementing his words.

“Thank you.” Rebecca slapped the surface of the lake splashing the water.

Marty watched three figures surface in the light from the boat. His jaw almost thundered off the deck in shock.

Rebecca grinned. “The mystery of the lake is —”

Please Vote For Me!

My story ‘Oracle Train’ is leading in the final round of the Purple Wall Competition.

Thank you to all who’ve voted so far. You’re all amazing!!

Please keep voting every day at the link below and help make my victory come true!

26 thoughts on “In Eider Lake”