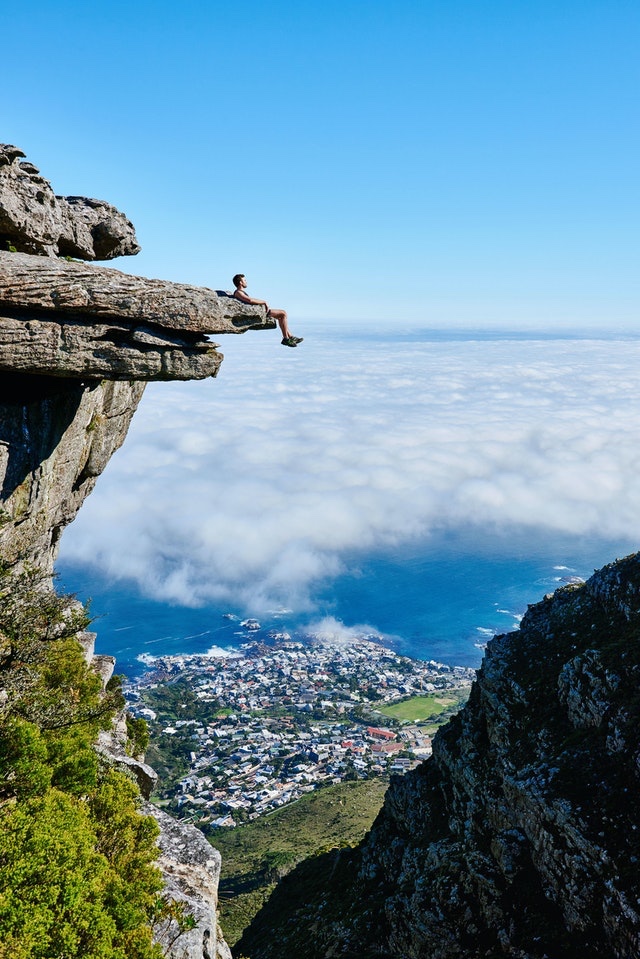 “It doesn’t matter who are, what you look like, what you believe, or even what you do. You’ll be in the wrong somehow. I don’t think a lot of it is racism, sexism or anything else. I think humans just want to be better than each other and they love to whinge, moan, and complain about everything!”

I wrote this Story in answer to the following prompts:
Fandango’s Flash Fiction Challenge #102 — The picture above
Word of the Day Challenge — Comeuppance
Ragtag Daily Prompt — Muddle
Fandango’s One Word Challenge — Service

That’s me sitting high on that craggy ledge. I like nothing more than spending time up here among the clouds dreaming of what I could have been. See the village rolling down the hills beneath me and almost splashing into the sea. That’s Hawkstaff the wizard’s village I was born in.

I was born Orion Pendercast, a great wizard by name if ever there was one.  However, that wasn’t to be. On my first birthday, I was dressed in my robes and taken for my Unification Ceremony. You see, all wizards are unified with a magical staff at the youngest age. The staff becomes a channel for their magic, they cannot cast a single spell without it.

My father Sindorian Pendercast performed his part of the ceremony and everything was going well. Then Archmage Gildenghast had me hold my silver birch and aquamarine staff. He began the unification spell and all-magical-hell broke loose. The staff flew from my hands with a great crackled with energy. Gildenghast was launched halfway across the room where he crashed down on my aunts and uncles. My father finished up hanging from a chandelier, the candles gently torching his robes. The thought still leaves me fit of giggles.

You can imagine the muddle that transpired. Even though I was young I can remember all their whisperings and silent cursing’s. Then Gildenghast returned to the alter, his glasses askew.

‘I’m sorry, Sindorian. Your son is not and never will be a wizard!’ He proclaimed shocking everybody. And that was it, I became an outcast in the village of Hawkstaff.

I wasn’t allowed to go to the wizard school, nobody would hire a useless wizard either. They said I couldn’t be of service as I wasn’t a wizard.  Yet I could decent magic just fine. I didn’t need the staff to make things move around the room. All I had to do was think and it would happen. I can sweep our entire house with a straw broom while sitting in the armchair. I even became very good at mixing potions too. Did matter though, nobody wanted me. I wasn’t a true wizard without a staff and so I was cast out of society.

Unloved and as unwanted a rust nail, I began to explore the mountains. I climbed ever higher until one day I came across this wonderful ledge high above the village. I sit here in the clouds plotting the comeuppance of those who wronged me because I was different.

Last week, I took a fall, injuring my leg. Bleeding and disorientated, I stumbled upon a grey stone hut among the crags. It had a thatched roof and all manner of herbs hanging, drying round the walls. In need of help, I knocked on the old wooden door. I could smell sage, comfrey, Saint John’s wort and garlic on the light smoke issuing from between the planks.

“You better not be stealing from me, deary,” said an old voice from behind me.

“No, I fell, I was looking for some help,” I told her while indicating my oozing leg.  “I’m Orion it’s nice to meet you.”

I’ll never forget the way she looked me up and down like a curious raven. “Oh, yes, you’re Orion but you’re no Pendercast, are you boy?” she said with a cackle.

“By name I am but that’s all. Without a staff even my father shunned me.” I looked at the woman draped in her blue shawls. She was old but still showed signs of being pretty in her younger days. I loved how her silvery-grey hair seemed to sparkle in its bun. “How do you know me?”

“Everybody knows the boy who nearly killed the archmage by not being a wizard.” The woman broke into a smile and cackled in her funny way. “You do, do magic though don’t you, boy.”

“Sure, I do. I need no bloody staff to do it either. Not that it matters to that lot down in the village.” I remember feeling particularly low again then.

“Their loss. Come inside and we’ll see to your leg.” The woman made a gesture with her fingers and the door swung open as if caught on an invisible breeze. “I’m Malindra Utopia by the way.”

I followed her into the smoky hut.

She immediately extinguished a fire beneath her large cauldron and stirred in a few more herbs. “That’s for athlete’s foot in case you wondered. Sit down, boy.”

I raised my eyebrows and gulped. This was where my heart skipped a beat as I realised she was what my father called a hag. He always told stories of them being dangerous. Had I just made a fatal mistake following her inside?

The old lady darted about fetching potions and bindings and a bowl of warm water. “You do know why you don’t need a staff, don’t you?” She said as she began to clean my wound.

“I wish I did. Maybe I could fix it,” I replied feeling forlorn.

“Ha! You gotta be broke before you can be fixed. There ain’t nothing wrong with you, boy. They shunned you because you’re a witch.” Malindra grinned toward me.

“I can’t be a witch only women can be witches. Father calls them hags, says they’re evil. You’re not gonna kill me are you?” I blurted without thinking.

“Ha! Racist magical-ponce! I’ll curse his staff into a bow tie around his bloody neck if I catch him.” Malindra finished working on my leg. “There you’ll live. I want you to go home and tell my cousin Sindorian I think he’s a rotten crab apple for casting you out. He knows full well witches are just as powerful as wizards. More so as they’re far more capable at potion-making and spellcasting without needing a staff. Furthermore, you shall no longer be known as a Pendercast. You are a witch and therefore your name is Orion Mooncatcher. Once your message is delivered, slap Sindorian for me and return here. I shall teach you all you need to know about your magic.” With that Malindra pushed me out of her hut and vanished inside.

Well, now I knew the truth about myself. I’ve been sitting out here on my craggy ledge above the village thinking about it ever since. I’ve already begun learning with Malindra. What she’s been teaching me is incredible. I can’t stop smiling while wondering just how to use my magic to get vengeance on the wizard community with Hawkstaff village.