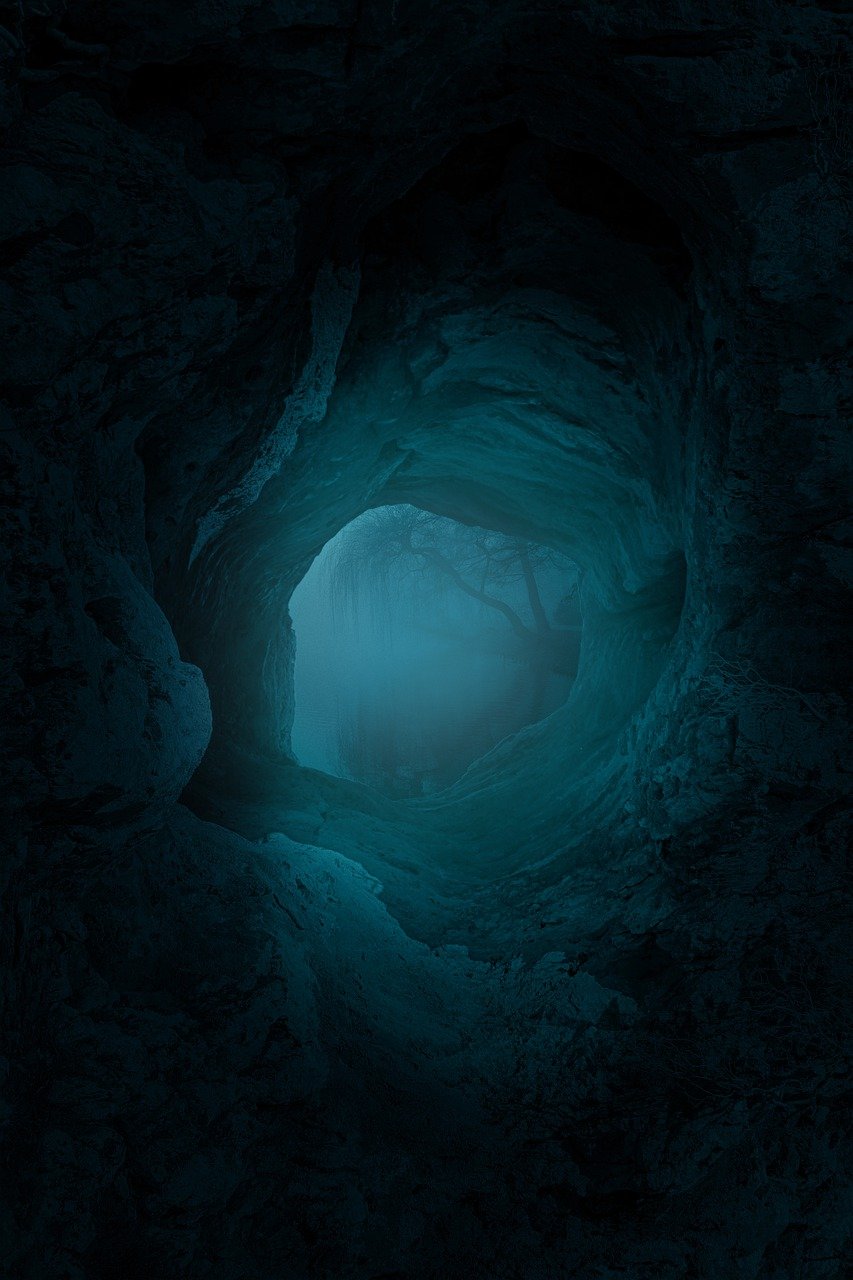 “There’s been an endless saga of real-life tales surrounding those who venture into caves and never return. What’s down there? I’m not going underground to find out! You do it!”

“I’m Michael Sowerbridge, reporting for the Historical Channel news. We are at the site and what could be the United Kingdom’s greatest ever archaeological find.” Michael turned to the side allowing his camera to pan over a rocky cliffside. Within a falcate depression, a seven-foot-by-three-foot granite slab was visible. Ropes had been anchored to it in readiness to pull it down. “As you can see the archaeologists have cleaned the slab. Their delicate work has revealed glyphs carved into the granite. Most of them represent animals from the time, but others like the spiral with the ‘A’ at the centre, appear weird and of unknown origin at this point. Excuse me, Professor Phil Chadwick. May we have a word?”

The archaeological professor gave the reporter a look of displeasure. He removed his beanie hat and wiped his perspiring brow. “We’re about to remove the slab. I don’t have long to talk.”

“That’s okay, Professor. I just wanted to ask for our viewers. What do you expect to find behind the slab?”

“At this stage we’re unsure. The markings could be Pictish in origin. The mathematical markings certainly fit. Of course, the Picts never got this far south, as far as we know. Many of us believe this has something to do with the Druidic people who built Stonehenge. For now, it’s a mystery until we get inside. Do excuse me.” The Professor walked away from the camera and nodded to his team.

“Everybody clear!” yelled one of the workers. Everybody, pull in unison!”

The first two pulls did nothing. The next tug caused the great slab to break free with a billow of dust and debris. The Crane on top of the hill took the weight and eased it out of the depression where it was leant against the cliff wall.

“Well done, everybody! We’re in.” Professor Chadwick remarked over cheery applause. “Take a break, team. Phineas and I will look inside first so we don’t damage anything of significant importance. Then we’ll invite you all inside to see what we discovered.”

Fresh applause rang out as all eyes were on the dark rectangular void left in the cliff face. It was one of those moments of pure exhilarating adventure as all wondered what might lay inside.

“This is it! The way is clear. Professor Chadwick and chief archaeologist Phineas Potter will go in first. They must conduct a brief examination of the contents to ensure its safe for everybody to enter. More importantly, they have to make sure no archaeology is going to be damaged by having too many people trampling around inside,” Michael told the camera.

He felt quite jealous, watching the two men go inside without him. He’d had a row off-camera about it earlier. As the TV stations top reporter, he felt it his duty to go in with them and reveal the discovery to the world. Chadwick had impolitely told him otherwise.

After the two top archaeologists vanished into the Cliffside, the team outside fell into quiet little groups. Some having a bite to eat and drink. Others tidying ropes and discussing what might happen next. Nobody expected the mystery which was to come.

Michael looked at his watch sometime later. Concerned, he approached one of the archaeologists he often conversed with. She was a senior member of the team and would often be in charge of one or two of the trenches they were digging. “Juliet, they’ve been in there for hours. Don’t you think somebody should go in and see if they’re okay?”

She nodded, “We were just discussing doing the same thing. Want to come in with me this time?”

“Adrian, I’m going in to find the Professor with Michael. I’ll be on Channel 2 on the walkies. If you lose contact with me for more than fifteen minutes: Call the emergency services.”

“Roger that, be careful.” Adrian saluted with his radio.

Juliet looked at Michael, took a deep breath and crossed the threshold into the cliff.

Michael followed right behind her. He was greeted by a narrow, bare rock passage. It was clear to see the chisel marks made by the ancient people who tunnelled through the cliffs. The passage wound snakelike deeper into the earth. There were no side passages, markings or artefacts to be seen anywhere. Then without warning, the passage widened into a conical shaped chamber.

Juliet flashed her torch around revealing nothing but non-descript rock walls.

“Well, I was expecting more artefacts to admire in here, than this,” Michael remarked. He directed his torch upon Juliet and saw fear written on her face. She was white as a sheet and trembling. Michael put an arm around her at once, “Hey, what’s wrong?”

“Phil and Phineas are not in here. We saw no side passages and we know they didn’t come out. So, where the hell are, they?” Juliet took a deep breath which did little to calm her. “Michael, what the hell is this place?”

Michael felt frozen to the floor as he directed his eyes to look around the chamber. Juliet was right, the two archaeologists seemed to have vanished. “If they didn’t come out. Something paranormal’s going on in here. We should leave be—”

The conical chamber began to vibrate with a low humming note.

Michael felt it as if it was burrowing right into his bones. Everything began to spin in his vision as the walls took on a weird, blue ultraviolet light.

Adrian and those waiting outside would call for the emergency services fairly soon. The three archaeologists and Michael were never found within the cliffs — they’d vanished. Only a bronze button remained as proof they’d ever been in the cave. Oddly, nobody else ever disappeared from within the chamber either. To be safe, it was sealed and forgotten about.

Theories raged as to what happened for years. Some believed the four missing people had entered the chambers before that day. They said, they’d likely stripped it of valuable artefacts. Then performed the disappearing stunt so they could live out the rest of their lives as rich people on a beach somewhere.

UFO enthusiasts said the conical chamber was a wormhole to another planet. Others deemed it to be a portal to the realm of Agartha deep within Earth. A good theory as many entrances were said to exist around the world. Each supposedly guarded by such portals and traps as seemed to be in this mystery chamber.

The truth, however, might never be known. What do you think happened?

Thanks for reading my friends, I really do appreciate it.