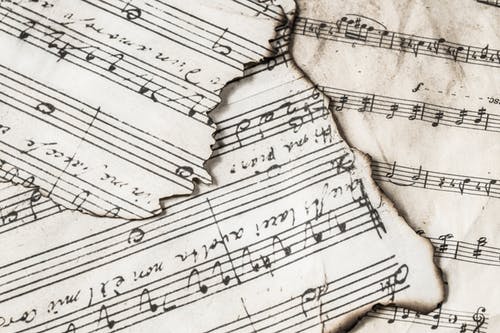 This was written for a Monday Prompt a while ago. I enjoyed this one and I feel it fits Today’s Fandango’s Dog Days of August #3 prompt well.

“So, you’re saying the sheet music brought you here?” Alan looked up at the ivy-covered ruins of the once grand manor house in disbelief and sighed. Today was Monday, he should be at work. Instead Molly had dragged him here on a treasure hunt that would surely get him fired.

“Yes, the music had notes that didn’t belong. Letters that you can’t play on a piano. When extracted, they read; ‘My riches hide with the music. Find me within Corvus Manor.’ So, here we are.” Molly smiled at him and dashed through the door-less archway.

Alan grinned at her disappearing ponytail and followed her inside. “Well, the music room was at the east end.”

“Great, lead on.” Molly bounced on the balls of her feet and urged him onward.

“This way.” Alan moved down a leaf-strewn corridor. Not one ceiling beam or roof strut could be seen in the building. Only its crumbling walls remained.

“This is creepy!” Molly gazed at the crows flying and squawking above her. One dropped a twig on her head, she squealed and turned into Alan’s arms.

“You okay?” he asked. He was actually beginning to enjoy absconding from work with Molly.

“I will be. Come on.” she gave a playful smile.

“Good. Look – in here.” Alan smiled and led the way into a room. Its windows were gone, the floor buried beneath years of leaf litter. The walls and inglenook chimney were the last remnants of the grand music room.

“My ancestors owned this house. You don’t belong.” Alan retorted.

The man leapt on him, driving him to the floor.

Molly seized a rotten beam and beat him off. To her relief he threw up his arms and retreated from the room.

“Thank you,” Alan said when he was gone.

“I think he was a vagrant. Are you okay?” Molly helped Alan stand.

“Yeah, I’m fine.” Alan took a breath and brushed himself down.

“That’s a relief. Oh, look!” Molly pointed to a minim etched in stone on the chimney. She worked her fingers around it and pulled the stone from the wall. It reveal an old mahogany chest. “Your grandfather’s treasure. At last.”

Thank you for reading! Do check out the Short Stories tab for more fun tales.

Processing…
Success! You're on the list.
Whoops! There was an error and we couldn't process your subscription. Please reload the page and try again.