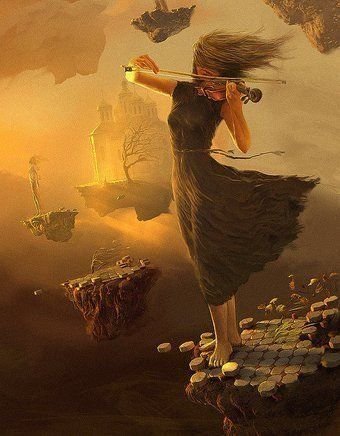 I created this story from the picture created by Andrew Ferez, a Russian artist illustrator. He calls this one Violinist. You can check out more of his art on his Deviant Art page where he is 25karitnok.

I reshare it as a favourite and because it contains the word ‘Pergola’ for the prompt here on the This That and the Other website.

The Castello Francesco on the island of the same name was staging a lavish party. Italy’s wealthiest nobility was celebrating the wedding of Principe Alessandro to his bride Valentina.

Lucrezia Laguna was the Prima Violinist of the Royal Venetian Orchestra. This evening she’d been procured by Alessandro to perform at the party. Lucrezia felt lavish in a black pleated dress, which fit her slender form beautifully. Barefoot as required, she was escorted to a tiled patio within the grand gardens. Her instructions; to play beneath the willow pergola, amid the roses for the duration of the party.

Lucrezia loved her role, playing her favourite classical songs in the evening sunshine. She enjoyed watching the aristocracy promenading about the garden in their regalia. Her rendition of a Vitali Baroque must have been pleasing as it drew in a young nobleman. She felt his hand grace her waist as he came and kissed her hand.

“Dear Lucrezia you enchant me. I Aurelio shall whisk you away to a room for two, at midnight,” he whispered into her ear.

Lucrezia felt warm and blushed at his words. She smiled bashfully but said nothing as she continued to play her violin.

He beamed and returned to the castle. Lucrezia’s allowed her eyes to wander to the setting sun, its warm-amber fingers casting a bronzy light over the castle and gardens. ‘I wonder if I’ll see him again?’ she thought as a zephyr of warm air billowed her silky, cedar hair across her face. With a dainty flick of her head, she moved the locks aside and caught her breath.

Her eyes dropped to her toes; she was glad she painted her nails this morning. Being barefoot had a hidden advantage now. A tremor had reverberated through the patio – she’d felt it clearly. A look about revealed nobody else had noticed it.

Lucrezia continued to play slipping seamlessly from Bach to Schubert. Her eyes found a birdbath – its water rippling. Her feet registered another quiver running through the earth.

“Did you feel it, Signorina? Your beautiful music made the earth move,” said a gentleman walking by.

“Thank you for the compliment, Signore.” Lucrezia took a breath – she’d felt these tremors before.

“Why are you so worried?” he asked.

“You must warn Principe Alessandro. Everybody needs to get off this island, now!” Lucrezia indicated the water rippling without silencing her music.

The gentleman grew wide-eyed “Merde!” he ran toward the castle.

Another tremor tickled Lucrezia’s feet. “Everybody, please head for the boats while you can!” she called but all too late.

As if a bomb had exploded within the earth, the ground shuddered and convulsed with tremendous force. Lucrezia felt the ground lurch, dumping her to the ground. She watched the parapets of the castle crack and fall, as trees toppled and statues became rubble around her.

“Yes, we know it’s an earthquake, you silly woman!” Lucrezia climbed to her feet amid violent tectonic shuddering. Many people were heading for the dock now. All seeming drunk and terrified as they ran through the quaking garden.

Lucrezia watched a crack raging across a lawn. With determination, she gripped her violin and began to play the Moonlight Sonata, Beethoven’s most soothing piece. Only a tear rolling down her cheek told of the fear gripping her heart.

The willow pergola folded like paper and vanished into a widening hole. The island was shaking itself apart. A glance at the lagoon revealed the usually calm waters churning. Then as the birdbath vanished into an abyss, Lucrezia realised she was adrift on a small piece of land. Still, she played on; feeling her music might help soothe the guests. Many of them were now floundering in the frothing, churning water. The lagoon was swallowing large swaths of Francesco Island now.

Hearing her name, she looked over her shoulder. Her hair billowed over her face and then she saw him, “Aurelio!”

He was running toward her, the ground split like an eggshell around him – pitching his flagstone into the air. He cursed and jumped.

Lucrezia screamed for him but she kept playing her calming violin music. “Aurelio!”

“I’m here.” he clawed his way onto her rocking patio, bleeding but alive.

“We’re going to die.” Lucrezia let him hold her as she resolutely played on.

“Then know I love you.” Aurelio kissed her. Never letting go as the island plunged underwater. The waves, swallowing Lucrezia and her music in a vibrant blue maelstrom which faded to black, serene, silence.

Check out more of my tales in the Short Stories tab too. Thank you for joining me on the website and for reading. Have a great day!

19 thoughts on “The Valiant Violinist”